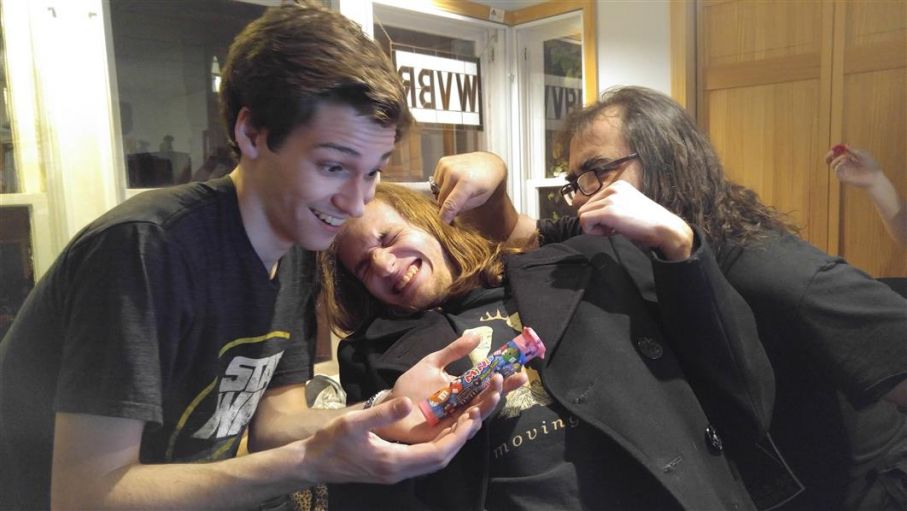 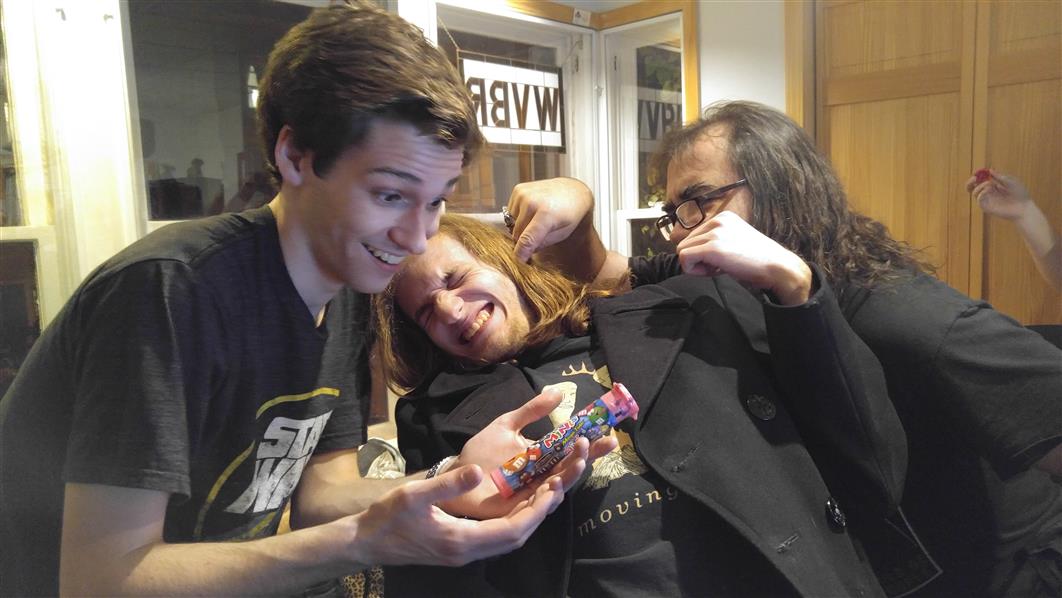 As this was the weekend that we set the clocks back one hour to go back on Standard Time, this LE was seven hours long. Present were, EVD, Just Joe, Nathan, Justin A.K.A. Twelve Inch, who was down to Seven Inch, but got a chance to gain those inches back tonight, more on that in a bit, Kevin, and Anna. The whole night was a Russian Roulette Show. Azkath had a bunch of tubes of twenty year old M&M's, every time a bullet played, everyone had to eat one of them. They made Justin sick, Nathan act all weird, hallucinating about cockroaches being everywhere, and seeing people at the door, for example, and, Just Joe, well he loved them, became addicted to them, wanting more and more of them. This may have been the first time that he kept trying to say there had been bullets when there were none, usually he tries to get out of bullets, tonight he was demanding them. By the end of the night, Justin had puked, and gone home, not sure if he gained back all those inches or not, Nathan was insane, and Just Joe, well, Just Joe wasn't looking too good, after having downed so many two decade old M&M's. I think a stomach pumping might be in order. Quick. 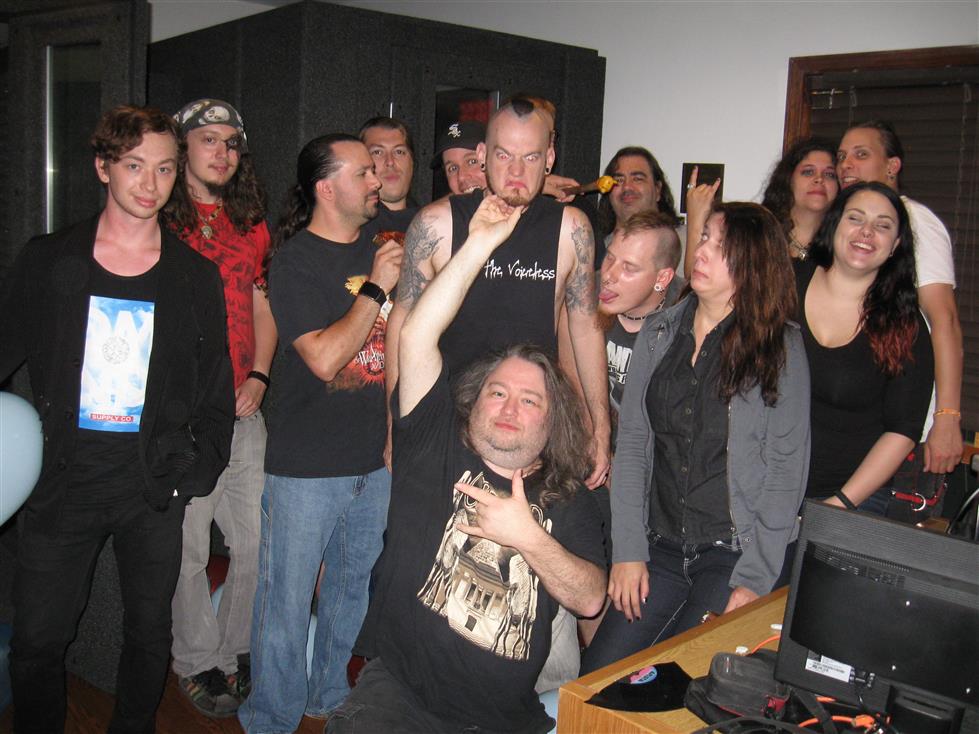 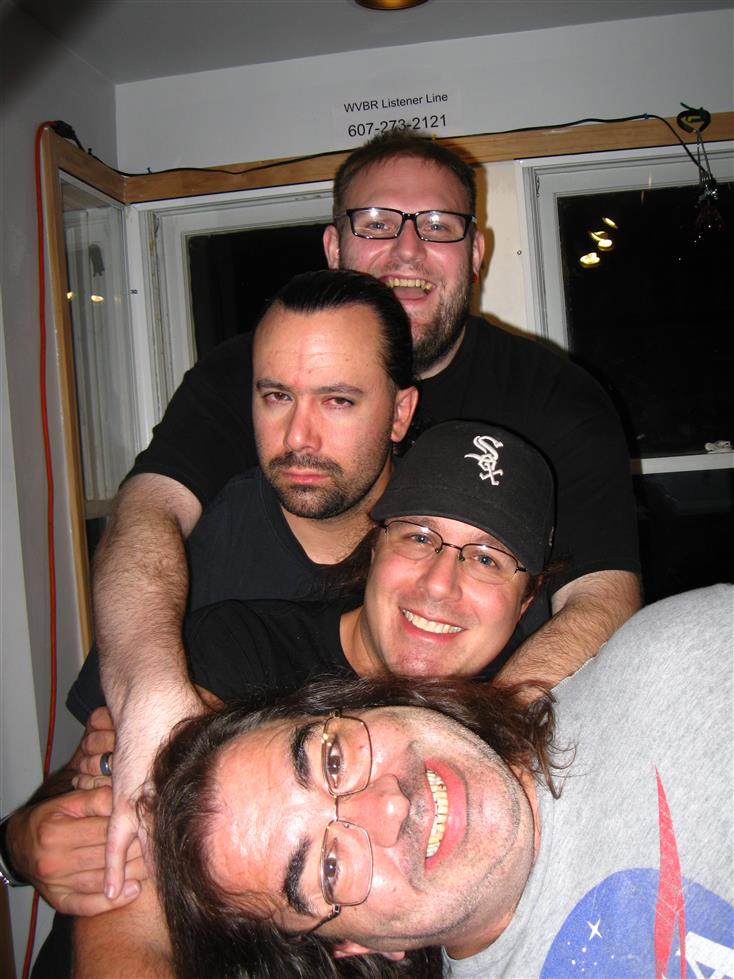 The day after this LE, September 21st, would be Azkath's Birthday, Happy Birthday, Azkath(!), so this was a Russian Roulette Show, in honor of that, or rather a Spin The Wheel And see what horrible fate awaits you, which Azkath would get to pick. Present were, EVD, Just Joe, Nathan, Tim, Rob, R.J., Eric, James, the band Undead Messengers, and, Taylor, who is Tim's, the Undead Messengers Tim, sister. The results of the wheel spinning were, James had to break a record over R.J.'s head, then R.J. chased him into the bathroom, and, well, what went on in there, was so terrible that James didn't want to talk about it, just kept whimpering, among other things, it involved bad man smells. Tim, Nathan, Just Joe, and R.J., were in The Balloon Room, where people got molested with The Pooh Stick, and, somehow, Darksyde, wearing the same shirt as James was in there, and James was nowhere to be found, which was really bad news for Just Joe, as Darksyde really loves Just Joe a lot, unfortunately for Just Joe, Darksyde's way of expressing love is extremely violent, the more he loves you, the worse the beat down he gives you is. James got tasered by Azkath. Bicoastal Tim got thrown into a pile of mousetraps by Just Joe, which was, I guess, fitting, as, on Tim's Birthday, Just Joe had been tricked, being told he would get to throw Tim into a pile of mousetraps, for Tim's Birthday present, but it was really set up for Tim to throw Just Joe into them for his Birthday present. Undead Messengers Tim got a pie tin bashed over his head by Taylor, and he then fell into the mousetraps as well. Undead Messengers Tim and Olivia were put into The Balloon Room, where Just Joe tormented them with The Pooh Stick, and R.J. came up there to "Help". Olivia got shown Azkath's tentacles, in a closet, and was so traumatized that she whimpered that she was going home to Santa. EVD threw water ballons at R.J.. Somewhere during the night, Nathan got violated with The Pooh Stick, and had Just Joe play My Crotch Your Face with him. There were segments of Movie Time. At 2:00, The Old School Hour, and at 4:00, The Cover Set. And thus went the Spin The Wheel Apocalypse Show.

Recap by The Metal Wulf; (FEW Recap at end of Post) Alright, folks, you'd better all enjoy this one, because it's probably the only recap I'll be writing for The Last Exit For The Lost. So, how did this come about? What circumstances drove me to defect from The Metallic Onslaught for what would end up being only one night? Glad ya asked!

So, there was this sinister force in the universe known as Jeffie. Jeffie was a clone of the Last Exit's host, who we all know as the Demon Azkath.  (Well, more specifically, Jeffie was a clone of Jeff the Radio Guy, who in turn is a clone of Azkath, but hey, no sense in getting overly technical here...) On the last edition of The Metallic Onslaught, which was our Halloween show, Jeffie showed up as Pepe. Now, as the night wore on, Pepe decided I should wear his outfit, throwing his itchy poncho on me, and his sombrero, and also shoved his maracas in my hands. Hey, I did my best to play along, just go with it, try to have fun, yada, yada, yada... But then he had to go and chloroform me... This particular indignity was bad enough, but what came next was too much for this Wulf to take. The Onslaught's host, Joe Wyatt, suggested that Jeffie revive me by doing CPR, not knowing that I was slowly reviving on my own. But, Jeffie went with it anyway, and decided to give me mouth-to-mouth, clearly not knowing that tongue should NEVER be involved with the process. Suffice to say, Jeffie could probably have told you what the contents of my stomach were that night...

So, it was a a hard decision, but in the end I figured that it couldn't possibly be any worse going to Ithaca and joining up with Azkath's crew. As I understood it, Jeffie was never allowed on their show, so I would be free of him, once and for all! Now, I should mention that Rick from the Onslaught was also on hand this night, I think in the hopes of getting me to reconsider my move. But, my mind was made up!

And really, I'd thought I'd picked a good night to make my official debut! This was one of their Tribute To The Past Russian Roulette shows, which features nothing but older music The Russian Roulette portion comes from Azkath playing random selections of music. A "bullet" in this variation is actually in the form of a certain category of song, whether it's something that's been overplayed on mainstream radio, or something really cheesy, or a cover version. Those are a few examples anyway. When a bullet plays, someone gets to pick a little slip of paper out of a bag, and what's written on the paper dictates what comes next. The person who drew the slip chooses somebody ("victim"is a good choice of words, here...) to be the subject of whatever's written on the slip. Example: Shane became the subject of record breaking. Literally, having vinyl record albums broken over his head! Other bullets resulted in a few of the guys being piled into the rest room, which was full (and I do mean FULL!) of balloons, not to mention EVD taking a shot to the head with a DVD player (courtesy of me!). If you're a regular listener, I'm sure you know of what I am speaking! Actually, it was a great deal of fun until a bullet with Jeffie's name on it was drawn... Now, this meant that somebody had to actually call Jeffie to come onto the Last Exit, where he is normally forbidden. I mean, really, of all nights! What the HELL? Azkath suspected this particular bullet has been snuck into the bag by Just Joe. But rules are rules, so, against the wishes of nearly everybody there (except Just Joe), Jeffie arrived. It was a short visit, I must say... I think I may have let out a war cry of sorts, as I picked up my liter size bottle of Mountain Dew, and a sharp fragment of record album that just happened to be within reach. What happened next is probably far too gory for words, as I proceeded to bludgeon and slice Jeffie into a virtually unrecognizable lump of red goo in the hallway. Sloth, no stranger to The Last Exit, summed up part of the carnage, describing my ripping Jeffie in half after grabbing hold of each of his butt cheeks. Now, I really must have been in a blind rage, 'cuz I really don't quite remember that part... Anyhoo, what was left of Jeffie was probably far more shocking than the time I killed and ate all his llamas. Just Joe was highly displeased (okay, more like ENRAGED) at returning to find his friends' remains strewn about the hallway, and I think Azkath was a little put-out with me as well. He even went so far as to say that he wasn't making any more Jeffie's to send to the Onslaught. Now, Rick and I both agreed that the Onslaught would be perfectly fine with that, but Azkath seems to think that without Jeffie, we're only going to end up turning on each other. Actually, this was kind of a non-issue at first, since I'd still planned on staying true to my defection. At least, up until I became the subject of a bullet... Just Joe had drawn this particular slip, which simply said "Porno Joe". He didn't seem familiar with this particular action, but made me the target anyway. Azkath assured Joe that he'd remember soon enough, and began playing some really bad Seventies porn music. Next thing I knew, Joe was stripping his shirt off and giving me a lamp dance, bouncing his hairy monkey-like physique on my knees, rubbing my head. I think unrestrained panic would be a good way to describe my reaction. It took my beating him with a computer keyboard to get him off of me, and I quickly made a run for the door, screaming for Rick to get me out of there! Of course, once it was all over, Just Joe didn't remember a thing and I was emotionally scarred, quite possibly for life. They'd gotten me calmed down sufficiently, but I'd already changed my mind about my decision. I was gettin' out of there and returning to the Onslaught!

Hey, if nothing else, we don't have to worry about that annoying Jeffie anymore!
Read more...