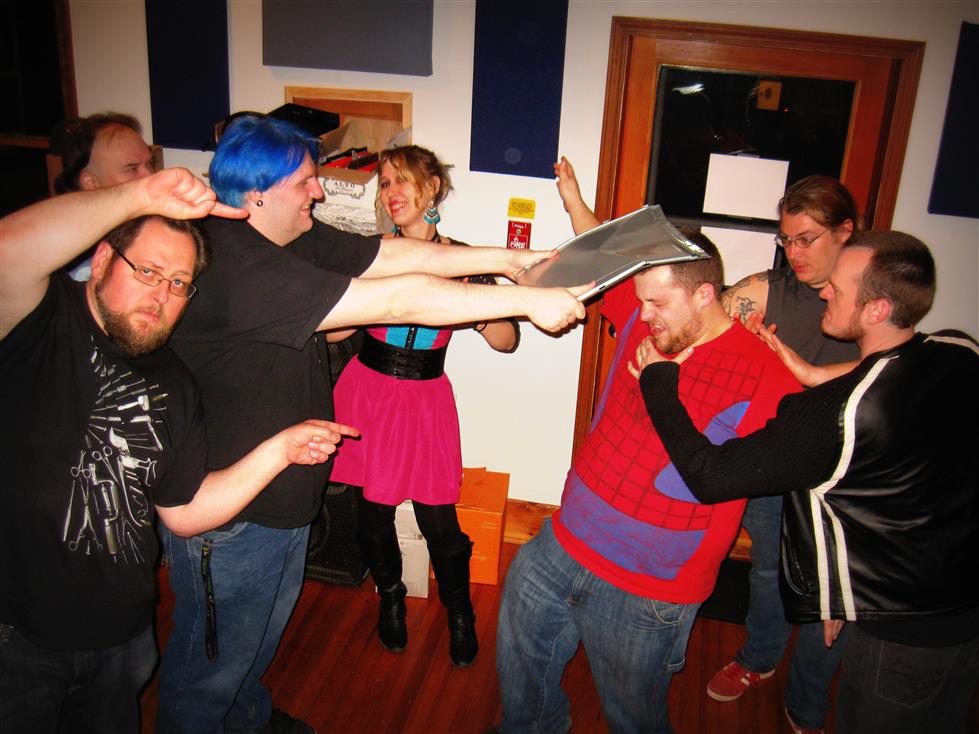 Present were, James, Rick and Randy, from The Metallic Onslaught, Randy, or R.J., as we call him to avoid the confusion of two Randys, and Rob, both from the band Thirteen South, and, The Worst Co-host In The World, Dave, who, earning his title, had not been there in months. Lots of rounds of Hide And Go Beat were played. Dave found Randy, and so got to beat him and knock him out with a metal sheet. R.J. couldn't find James, which made him furious, so much so that James was afraid to come out and beat him, but he did. No one could find Dave, so he and BBBIIILLLLL!!!!! are the reigning champions at this game, so Dave got to beat on anyone he liked, Rick wanted to be beaten so Dave hit him with the sheet first, then everyone pretty much hit everyone, James, R.J., and Dave all bled, and the sheet was reduced to scrap metal. So a lot of violence, some bloodshed, and some disturbing stuff as people molested other people while they were knocked out. There was a brief salute to Mother's Day, Nuclear Assault's song, "Mother's Day", was played. There were segments of Movie Time. Everyone got to pick a song toward the end of the night. The last hour was mostly The Old School Hour, except for a couple new songs that Azkath had meant to play earlier...

Mushroomhead "We are the Truth"

Steel Panther "Party Like Tomorrow is the End of the World"

FuManchu "Invaders on My Back"

Doom:VS "The Dead Swan of the Woods"
Hollywood Monsters "Fuck You All"
Domination "In Front of Reality - Follow the Beat of your Heart"

Arcturus "For to End Yet Again"