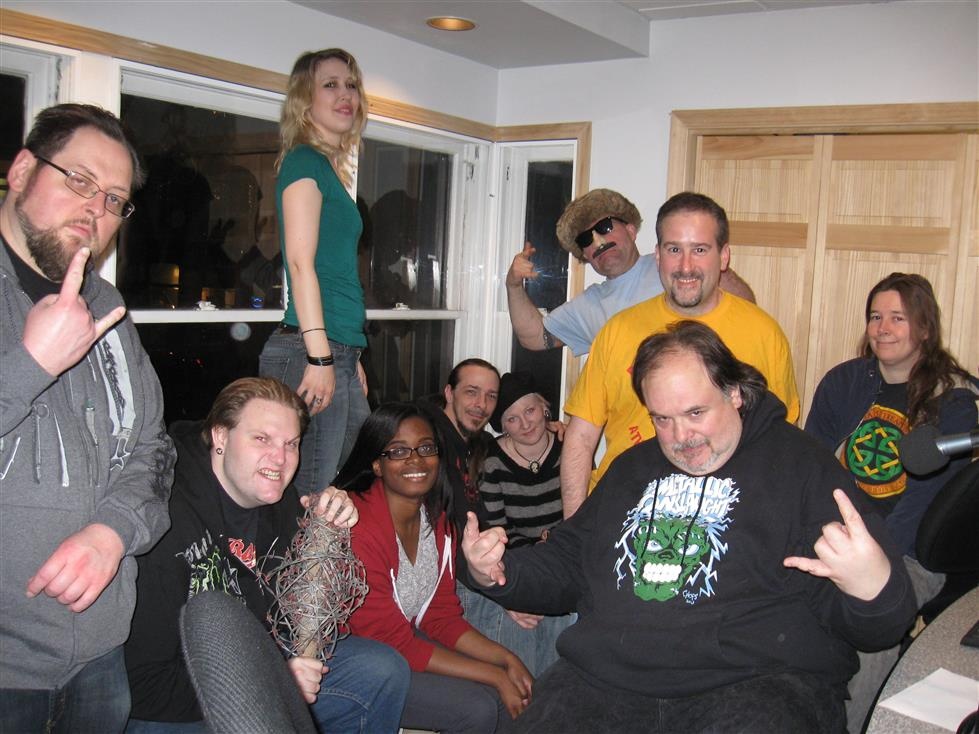 It was Easter Sunday, so of course it was our We Love Satan Show. Present for this were, James, Rick, Randy BILL!, and Annie, all from The Metallic Onslaught, Allie, Kal, Mark, and someone who once was Crappy The Clown, and sometimes still is, but you never know what personality he may turn up as, for a while this night, he was Humpty Gump, then he was Dr. Phil for a while. It was Easter, and, every Easter we kill The Easter Bunny, many times, for our Easter sacrifice, then resurrect him, by pouring water on him, holy water, if you will, so we can kill him again. Whoever is wearing The Easter Bunny ears is The Easter Bunny. First it was Randy, and Azkath beat him to death. Randy was resurrected. Next, BBBIIILLLLL!!!!! wore the ears. A game of Hide And Go Beat was played, The Easter Bunny would hide, and people would take turns looking for him, in the dark. The one who found him would get to kill him. But, after three people trying and failing to find him, the lights were turned on, and everyone went looking at once. James found him. But then James vanished, and Darksyde appeared, and showed BBBIIILLLLL!!!!! how much he loves him, unfortunately for BBBIIILLLLL!!!!!, when Darksyde really loves you, he beats the crap out of you. While BBBIIILLLLL!!!!! was dead, Allie did a puppet show with his corpse. BBBIIILLLLL!!!!! was resurrected. Next, James wore the ears, and they beat him to death. While he was dead, Kal was enjoying poking him with a big club. James was resurrected. Crappy The Clown's uncle, Uncle Punchy, showed up, with an Easter game, Pass The Schmuck. People would have to throw a party streamer to each other, if they dropped it, or it broke, there would be a consequence. The consequences could be, Poop Head, where you would have to wear a pile of poop on your head for a music set, Tape Head, where your head would be covered in shipping tape, and you would have to suffer the agony of having it removed, Penis Nose, where you would have to wear a set of goggles with a penis on them for a music set, Short Bus, where you would have to wear this helmet that Uncle Punchy had brought for a music set, Metal Head, where your head would be covered in aluminum foil for a music set, or Truth Or Dare. Allie lost the first round, and she had to wear the penis goggles. Randy lost the second round. They let Allie pick his consequence. She picked Short Bus. Then Randy was The Easter Bunny again. And this time he would be killed by Rick chokeslamming him off the balcony, which was only about three and a half stories high. Gee, wonder if that would actually kill him, it doesn't sound that deadly at all, couldn't they have come up with something a bit more lethal?! I mean, Satan deserves a good sacrifice for Easter! So Rick did it, Randy died, they poured water on him, he came back to life long enough to get back inside, then died again. They pelted him with Easter eggs, a lot of them. Randy finally did revive again, but he wasn't in very good shape, kinda bloody, so Rick had to take him home. The clown, Crappy, sang us a song. Azkath played a clip for Crappy from way back in the day, a spot with Crappy's old band The Punch Drunk Monkeys, talking about him. There were segments of Movie Time, and some TV, and On-line shows were talked about as well. Topics were discussed like the JFK assassination. And, of course, most of the music was for, to, and about Satan, lots of satanic metal, and some comedy songs and skits about him as well. No appearance from Satan for his Show, and no appearance from Jesus bearing candy, either. Kal wore a gas mask all night, for some reason, but that's just Kal... And so, thus went our Easter We Love Satan Extravaganza!

Exodus "Devliver Us to Evil"
Dr. Know "Satan's Black World of Doom"
Venom "Live Like an Angel... Die Like a Devil"
Night Conquers Day "The Perseverence of Ignorance"

Mercyful Fate "Come to the Sabbath"