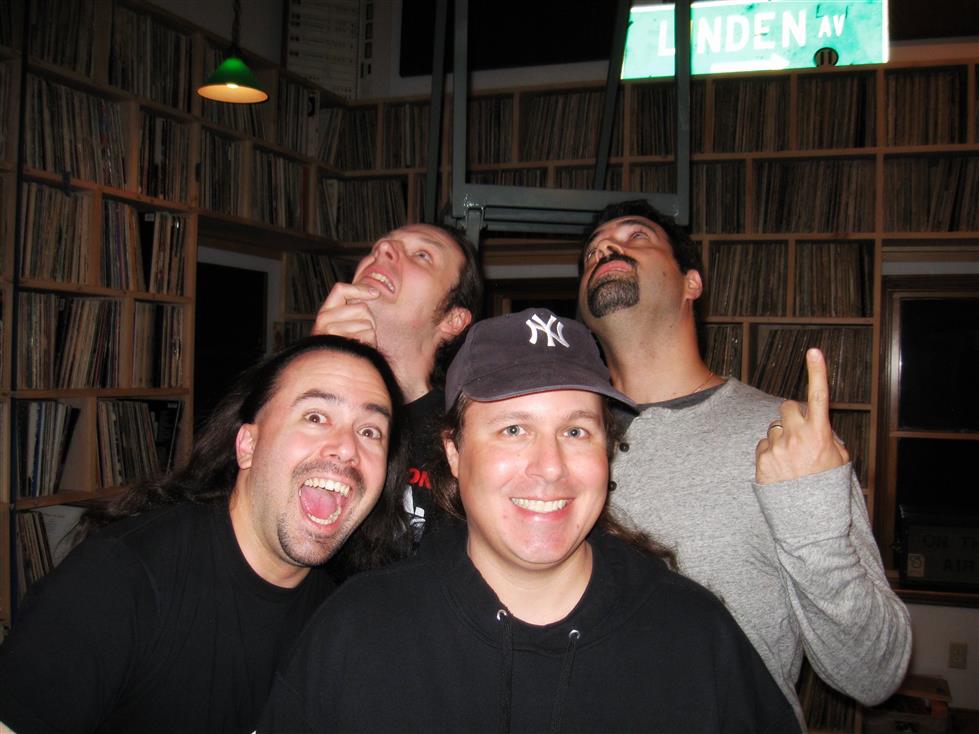 We had a couple more special guests, voices from the past who had been unable to make it in June, our month long celebration of our Twentieth Anniversary, which had concluded last week. This night, Shoebox, he of his one man comedy band, Worm Quartet, and, Deron Levine, a semi regular co-host from about sixteen years ago, were here. Also present were, Just Joe, Tim, and, Rick, from "The Metallic Onslaught", where Shoebox had been quite a regular co-host for a while. Clips from Best Of CD's were played throughout Shoebox's and Deron's times on LE. Azkath wanted Shoebox to repeat what had happened in one of those clips, and beat up Just Joe. Shoebox was a bit hesitant, as he had been back in the day, when he had been supposed to beat up Zoltan. It is hard to get him to beat up people, for some reason, but he finally went and did it. He had to go into the other room, where Just Joe was in a booth, to do it, and we got to listen, but Just Joe seemed to be pretty much ok. Shoebox's music was played throughout his appearance this night, it is awesome! www.wormquartet.com is his web site. Deron got to pick a set of music, and we had several segments of something we haven't done in quite a while, Adventures In Listening, where we play something no one has ever heard before. This time, they were all bands with really weird names and song titles, like The Leather Nun, and The Hostile Omish, with a song entitled "Who Put The Sea Monkeys In Mom's Douche?". And a band of mimes. Everyone was betting that these bands, and others would be really horrible, and they were right, although everyone did kinda like the Sea Monkeys song, it was so bad it was good. Azkath had something for Just Joe from one of last weeks returning co-hosts, who couldn't be there tonight, he had told Azkath to punch Just Joe a few times, the way EVD had always done when he was there. As my birthday had been in the past week, everyone sang "Happy Birthday To You" to me, Just Joe screeched it as only he can do, and Shoebox added some unique lyrics to it, which I'm pretty sure I have never heard in that song before. It was truly moving and beautiful! Thanks, guys! Azkath also played two short birthday songs for me, my favorite ones, as there hadn't really been room for them last week, with first a band performing, and then our playing mostly all music from the many, many bands who have graced us with their presence over the past twenty years. Thanks, Azkath, that was awesome, as always. There were segments of Movie Time, and TV programs were also discussed as well. Some songs went out to one of our regular listeners, John The Drummer, as his Birthday had just concluded less than eighteen hours ago, Happy Birthday, John! The final hour saw the return of The Old School Hour, which had been on hiatus for a month, as we celebrated our Twentieth Anniversary, playing, again, mostly music from the numerous awesome bands who have been on, or somehow connected to, LE over that time...

The Hostile Omish "Who Put Sea Monkeys in Mom's Douche?"