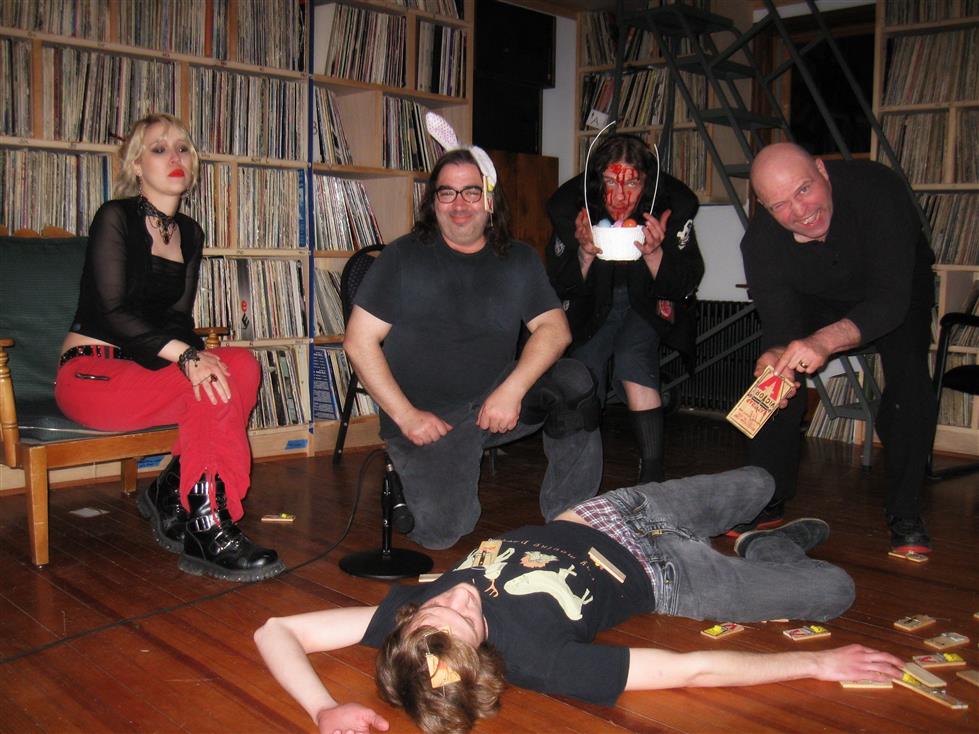 So this was our traditional We Love Satan Easter Show. Both Randy and Just Joe decided to boycott the show based on things that have happened to them in the past. Instead we had a different array of people, and a lot of fun was had. Joining us, aside from our weekly regular co-hosts in Arydaea and EVD, we had Crappy the... ur, Mr. Linda, and Jim Evans (JR) of Hollow Bodies. We also had the Last Exit debut of Nathan Bobbett, who had previously visited us on February 28, 2015 for Where Did the Road Go? when he was working sound for Lorna Reynolds. I may have lured him in after looking at his facebook page and realizing that he was a Bronie. I MAY have said it was a We Love My Little Pony Show. Regardless, he was there. As was Luke, also a guest from that same night on Where Did the Road Go?, and as an anthropology student, he just wanted to observe. After a while, he started growing horns, and after insisting he didn't believe in any of it, he left.

I had a present for EVD. It was nice and evil, and I thought he would appreciate it. I took some of Eric's clones' remains from a few weeks ago, and cloned a bunch of 'little Erics'. They were all around 6 inches tall, and I locked them in a sound booth. I thought EVD would appreciate the mad scientist aspect. I was wrong. And then they were lose in the building causing havoc. Luckily JR went to take care of them... and apparently started eating them. Their taste description was not appetizing. There are still a few running around I think...

After it came out that Nathan had been tricked into coming into the show, we gave him the gift of mousetraps, then we debated the power of Satan vs My Little Pony. Eventually Nathan saw the light. And EVD kept tormenting him with the Pooh Stick. JR and Mr. Linda played some songs on an acoustic JR brought with him, and near the end, Satan texted me to say he would be by for No Pants Day in a few weeks. Whatever form that will take...