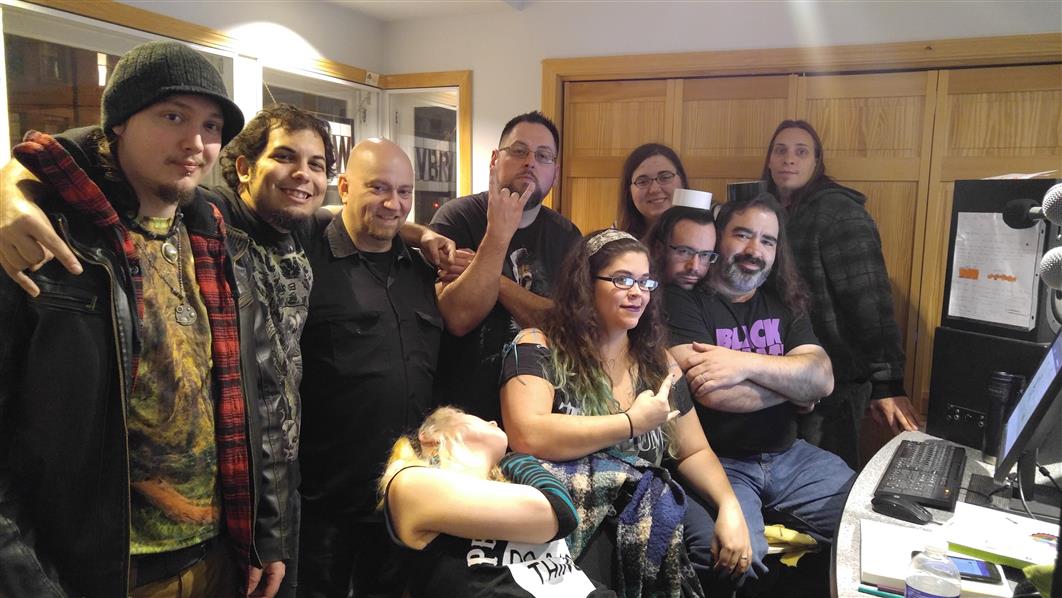 This was EVD's Birthday Show, as this very day was His Birthday. Happy Birthday, EVD! Present were, EVD (good thing!), Just Joe, Nathan, Daryll, Tim, and, Olivia from the band Undead Messengers, Ian, Olivia's brother from the band Corrosive Impact, Rick from "The Metallic Onslaught", Dave Henninger of the band Spit Nickels. Rick and Dave were there to promote an upcoming show, where Dave's band, along with several others, would be performing, and Rick would be hosting, "The Metallic Onslaught's Birthday Bash", as Rick, Josh, and, Cameron, Spit Nickels's drummer would all be celebrating Birthdays in the upcoming week as well. The band Malignant, who used to be the band Bloodsnot, now minus a member, performed several songs, all of their songs that they have so far, live in The Performance Room. As usual, props to Nathan for doing a great job running the sound. Malignant are an instrumental band right now, as Blood Snot was most of the time, although they are open to a vocalist. They rock. You can find them at www.facebook.com/malignant607. After their performance, the band was interviewed. A song from Spit Nickels's CD was played. They are a cool band, you can find them on Facebook. For EVD's Birthday, they got him a present. Just Joe was instructed to go get it, but he brought back the wrong thing, he brought Styrofoam blocks, which he got hit with by EVD. When he finally brought the right present, it was the Valhalla blend of Death Wish coffee, it's very strong, Ian gave him some creamer for it. They played a special Birthday game with EVD, "Who's Touching Me Now", EVD would close his eyes, and have to guess which one of three people was stroking his beard. He was very good at it, he only got it wrong once, when they cheated. Later, Olivia played the game as well. Olivia and Tim had a present for EVD as well. They gave him black and white Duct Tape, and told him he could duct tape them together any way he wanted to. But, actually, it turned out that EVD became the duct tapie, instead of the duct taper, Just Joe duct taped him, Tim, and, olivia all together in a big piece of black foam. Then he tried to give them away out on the porch, but I guess there were no takers. EVD said that Just Joe had done a pretty good job for an amateur duct taper, giving him a six out of ten score with ten being the highest. The Pooh Stick also made an appearance this night, people did disturbing things with it as usual. As we are drawing near to the end of the year, Azkath played sets of music throughout the night that were some of his favorite things released this past year, he didn't get to all of it, he had over two hundred items in his favorites folder. There were segments of Movie Time, TV programs were talked about as well. Azkath played the band Steve 'N Seagulls for EVD for His Birthday, because we all know how much EVD LOVES his country music!

Joey Ramone "What a Wonderful World"