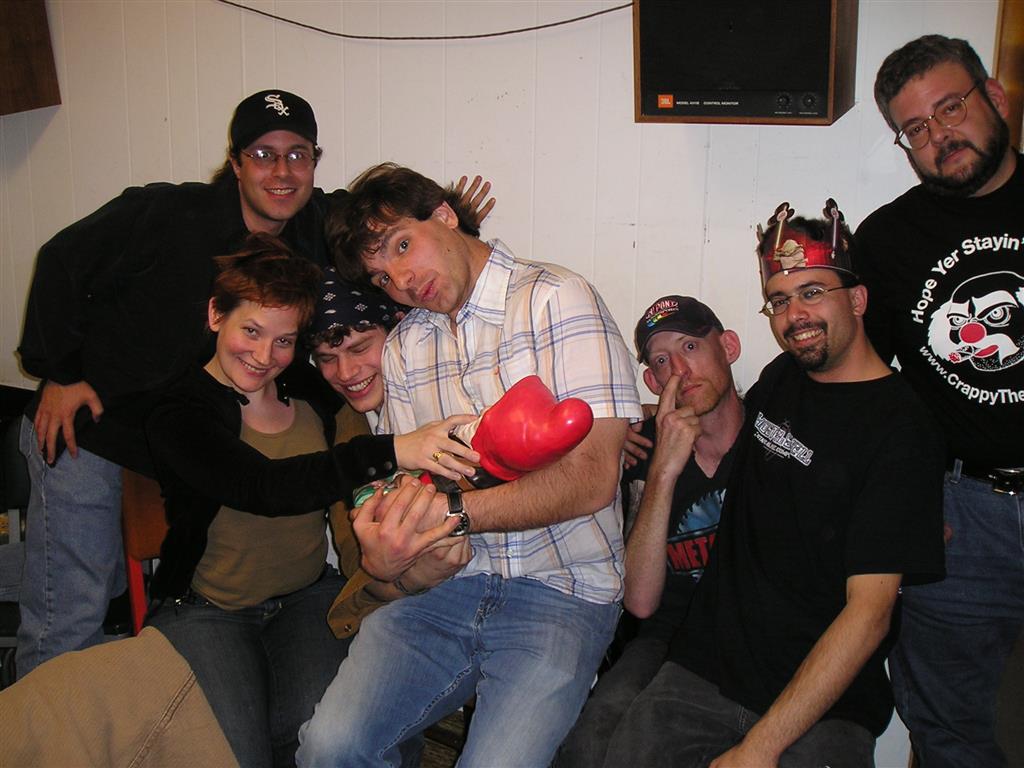 Tim from Victory Records was there after having been away for several months. The band Missing Marcus was on to be interviewed and to play some of their songs live and acoustic. They're cool. Also there were Mr. Zarumba of Punch Drunk Monkeys, and Dan-O Voodi of Punch Drunk Monkeys and also of the band Others. Mr. Zarumba played a couple of acoustic songs he had recorded as well. Very funny. They were there to promote The Xtreme Soundscapes DVD: Volume 2 Release Show. The big event will be this Saturday, June 4th, at Castaways. The show starts at 7:00. It only costs $5. The 1st 100 people through the door will get The Xtreme Soundscapes DVD: Volume 2 for free. And there will be lots of other free stuff, CD compilations, and all kinds of other cool stuff given away as well. And, of course!, the music! Never The Sunshine starts off the night, and If Man Is Five, Others, Elusive Travel, Divinity Destroyed, and Punch Drunk Monkeys complete with Crappy The Clown! (the Punch Drunk Monkeys and Crappy The Clown concert is a one time only, and, thus, a once in a lifetime event, as the band is broken up, and so that alone is something truly not to be missed!) will all be performing. And Just Joe will have a special roll onstage as well, which, I'm sure, will also be unforgettable and another thing that all by itself is not to be missed. This event also marks the 11th anniversary of The Last Exit For The Lost. So, all of you should be in attendance! Support the independent music scene, hear and see lots of great music and have a blast! All the visitors to LE were asked and gave their silly answers to lots of those crazy questions from theinsanedomain.com At the end of LE, they told Just Joe that they had a present for him in the basement. Just Joe seemed pretty ok with going down there to get it. On his way down there, we were told that it was just an empty box for another joke on Just Joe. However, when Just Joe came back upstairs, he was once again extremely upset. He was asked what he was so upset about, it was just an empty box, after all. But Just Joe said that it had not been empty... Yes, this time Just Joe claimed to have seen, not a monster, but spiders, lots and lots of spiders, everywhere. And, apparently, Just Joe does not like spiders. And so that was how the night ended, with Just Joe extremely upset and yelling about spiders.

Darkest Hour "With a Thousand Words to Say Just One"

Lurking in the Dark
A Mansion in Darkness
A Broken Spell
Sleepless Nights
Behind These Walls
Moonlight
Digging Graves
One Down, Two to Go
Help!!!
Spirits
Shrine
The Lake
Black Horsemen